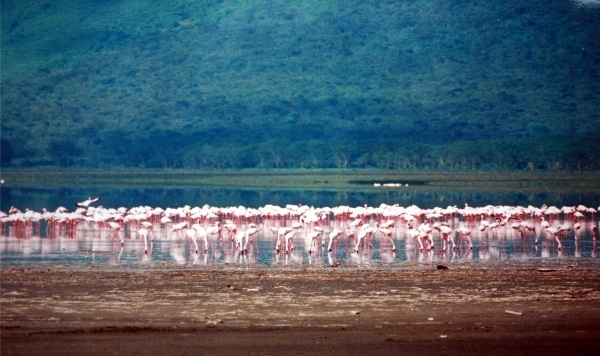 Lake Nakuru, the world famous haunt of flamingos, is a beautiful shallow alkaline lake, just south of Nakuru township. Surrounded by acacia woodland and rich Savannah, this park (364km / 142M)  is a superb example of conservation at work in the wild. Originally and still considered one of the finest ornithological sights in the world it is now with the assistance of the World Wildlife Fund, providing sanctuary for Rothschild giraffe, rhino and leopard. The edge of the lake is frequently a crimson ribbon of Greater and Lesser flamingos, while pelicans and other water birds swim and fish in majestic flotilla formation

Few Lakes have a more commanding or lovely setting than Lake Naivasha, the highest and purest of the Rift Valley lakes. Mt. Longonot (2,777 m/ 9109ft) in the distance, shades the lake in misty blues and and purples. At Hell’s Gate gorge with its steam jets, and Fischer’s Tower a pinnacle of soaring rock, game abounds and the rarest of Kenya’s birds of prey, the Lammergeyer nests.

Lake Baringo lies in the solitude of the northern Rift Valley only one hour from the township of Nakuru. This is a peaceful place of quite outstanding beauty, a breeding ground for fresh water fowl of some significance and the home of the Njemps, smaller cousins of the great Masai, who have abandoned the nomadic way of life for fishing in fragile craft made of reeds.

Visits to Lake Bogoria are arranged from this area. A place of great scenic beauty hidden in formidable hills, its exciting steam jets, boiling geysers and fumaroles are convincing evidence of the origins of the rift valley. The rare Greater Kudu is found here and at times it is the haunt of hundreds of thousands of flamingos.

Appropriately called “The Jade Sea” because of its  remarkable coloring in the harsh surrounding purple and black volcanic rock, this is undoubtedly the least hospitable, but most interesting of all of Kenya’s lakes. For in the Sibiloi National Park, a rich fossil region has revealed fascinating clues to the origins of mankind and his predecessors, dating back almost three million years. This far northern area is surprisingly in its wildlife and the lake also supports a large colony of crocodiles. Central Island is the nesting area of big colonies of fascinating water birds.