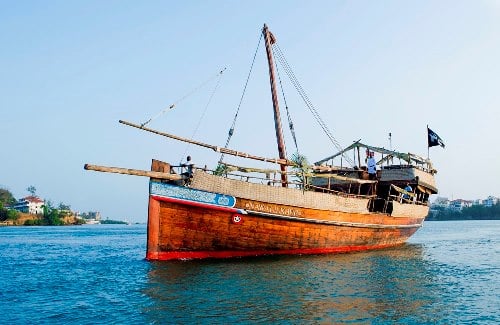 White sand beaches, fringed with palms, casuarinas, oleanders and brilliant bougainvillea, washed by the incredible blue waters of the Indian Ocean, refreshed by gentle monsoon breezes, and the enchantment of Kenya’s wildlife sanctuaries, only a few miles away. This is the Kenya coast – one of the most idyllic resort areas anywhere in the world.

The tropical coastline of East Africa has been recognized by historians for a thousand years. Ptolemy mentioned Mombasa in the 2nd Century A.D. The Turks and Arabs, infact all the seafaring nations of the East, came and went until the 16th Century when Mombasa fell to the Portuguese. They stayed for over a century and built Fort Jesus, eventually being starved out by the Arabs. It was not until 1888, that the sultan of Zanzibar was persuaded to cede the Kenya Coast to the British, and trade began to flourish. Up and down the coast modern discoverers will find fascinating relics of these ancient cultures.

This old but vibrant gateway to Kenya is a mystical mixture of ancient and modern, with a cosmopolitan population blending Africa, Arabia and Asia. Not everyone realizes that this picturesque port is an island, with two deep water harbours. Evocative of the east, graceful sailing dhows unchanged throughout the centuries, arrive on the monsoon winds, while  ocean liners berth just around the headland . Fringing the dhow harbour is the old town, a maze of narrow streets, quaint shuttered houses and open fronted shops. Nearby is the traditional open market with dazzling displays of local fabrics and prints, curios and intricate baskets. The ancient Portuguese fort fort, named Jesus, stands sentinel against long forgotten invasions from the sea and is now a fine museum of antiquities.

The waters of the Indian Ocean, off the Kenya coast, offer unlimited opportunities for the serious sport fisherman, or enthusiastic first timer, whether fishing for marlin, sailfish, tuna, wahoo or barracuda. The season runs from August to the end of March and good boats with well trained crews, are available everywhere. They range from luxury twin screw sport fishing cruisers, down through a wide range of small craft. The main centres are at Malindi and Watamu in the North, a magnificent offshore fishing ground for record billfish and Shimoni, off the Pemba Channel, noted for striped marlin, large yellowfin tuna and shark.

A vast uninterrupted stretch of white sand lapped by an opal ocean, with hotels nestling in cleared beach front areas of the Jadini forest, the haunt of colobus monkey and brilliant forest birds. Served by a fine paved road from Likoni, the Mombasa ferry terminal, to Shimoni almost on the Tanzania border, this is a well established resort area, with  fine hotels and a very wide variety of water sports and activities. The Kisite / Mpunguti marine Park, an intriguing underwater world, can be reached from Shimoni or Wasini Island a lovely trip by dhow or motor boat.

The coast area between Nyali Bridge and Kilifi (70 km/ 45 miles) to the north is another paradise of sand and bright blue sea. Nyali lies closest to Mombasa and on its shoreline overlooking beaches, silver-white and shimmering in the sun, stand some of Kenya’s finest beach hotels.Other notable areas are Mtwapa Creek an idyllic place for water sports with its calm unruffled water. Further north Kilifi Creek is crossed to reach Malindi by another motor  ferry. here far upstream hidden in the mangrove swamps seasonally roosts thousands of Carmine Bee-eaters, a riot of exotic color and most unusual sight.

The ‘lost city’ of Gedi whose inhabitants inexplicably vanished over three hundred years ago. Two Marine National Parks, with wonderful underwater coral gardens and thousands of tropical fish. Curved beaches which defy description, secluded bays full of enticing tiny coral islands and Malindi itself, an ancient town whose history goes back a thousand years. All this combines to make this an exotic and fascinating part of the coast of Kenya.

Lamu and other Islands

Lamu is a town, an island and an archipelago. The last remaining bastion of the Shirazi, the oldest of the cultures on this coast, the town is a delightful anachronism carrying on its daily life as it has for centuries, with its ancient architecture, intricate carved plaster work, mosques and a very fine museum. This is not by any means all this area has to offer, though often it is all the visitor wants or needs. There are beautiful beaches, a wonderful underwater world along the reefs in the Kiunga Marine National Park and two remote hideaways on Kiwayu and Manda are for those who dream of deserted tropical islands in the sun.